Washington DC, Jan 28 (DP.net).– During proceedings this Wednesday in the

Senate, Trump’s lawyers painted Biden and his son Hunter as corrupt actors worthy of investigation. Former Florida Attorney General Pam Bondi, in particular, zeroed in on the younger Biden for his role serving on the board of Burisma, a Ukrainian energy company, while his father oversaw Ukraine policy as Vice President of the United States.

“Every witness who was asked about Hunter Biden’s involvement at Burisma agreed there was a potential appearance of a conflict of interest,” Bondi said Monday, describing House testimony.

But Senator Joni Kay Ernst, a former military officer serving as the junior United States Senator for Iowa since 2015, said it was “entirely appropriate” for the president’s defense team to attack the Bidens. She said the information aired about them on Monday might be useful to the voting public.

“It really, I think, opened the eyes, maybe of not just the folks in the Senate, but maybe those folks at home that were watching this afternoon,” she said. “And with the Iowa caucuses coming up next Monday night, maybe it will influence some of those voters as well.”

Former Vice President Joe Biden on Wednesday was asked if he would call the Republicans' bluff and state that he’d testify. Reacting to the latest developments, he said he's opposed to testifying in the Senate impeachment trial. "We're not going to turn it into a farce, into some kind of political theater," the former VP said. He made his comments on the campaign trail in Iowa, but did not say whether or not he would comply with a Senate subpoena for his testimony.

Democrats argue that Trump's team has presented no evidence that Biden used his role as Vice President to benefit his son nor alleged anything improper other than the "appearance of a conflict." But Trump's defense lawyers reiterated that precisely because of this "appearance of a conflict" the President had the obligation to request a thorough investigation of the case. In addition, they argued that Vice President Biden had confessed in front of the cameras his direct intervention to remove the Ukrainian attorney general who was investigating the corruption case and presented a video clip of Biden's words.

Nevertheless, Andrew Bates, a spokesperson for Biden, said shortly after Pam Bondi’s Monday presentation that she was doing nothing more but spreading conspiracy theories that have been debunked by major news organizations, including the New York Times, the Wall Street Journal and the Washington Post. 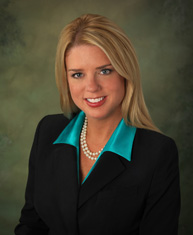 Pam Bondi, the former attorney general of Florida who is a member of the Trump impeachment legal team, refuted the "conspiracy theories" and outlined Monday before the Senate the concerns she said the president had about potential corruption on the part of the Bidens in Ukraine. She even went so far as to play again the tape of Joe Biden threatening to withhold aid from Ukraine while he was Vice President, and presented detailed evidence that there should at least be some reasonable suspicion into Joe Biden’s obvious conflict of interest given his son was making $80K a month from a corrupt Ukrainian gas company at the same time.

Bondi denounced the impeachment attempt as a continuation of the "reckless obsession" of removing a president who was elected as a Washington outsider. Se stressed that the president's team argument is that this impeachment amounts to 2020 election meddling on behalf of the president's political opponents.

President Trump’s lawyers are wrapping up their defense in the Senate impeachment trial this Tuesday as pressure increased on Republicans to allow witnesses to testify after the revelations about Ukraine leaked from former national security adviser John Bolton’s book.

Bolton wrote in his yet-unpublished book, parts of which were leaked to the New York Times on Sunday, that Trump told him that he paused nearly $400 million in military aid to Ukraine until that country’s president, Volodymyr Zelensky, announced an investigation into Joe Biden and his son Hunter, who was on the board of a Ukrainian energy company. On Tuesday, Sen. Lindsey Graham (R-SC) said he backs a proposal from fellow Republican Sen. James Lankford of Oklahoma to allow senators to review Bolton’s book. But Senate Minority Leader Chuck Schumer (D-NY) dismissed the idea out of hand, saying Bolton needs to appear in person.

And the controversy continues unabated ...