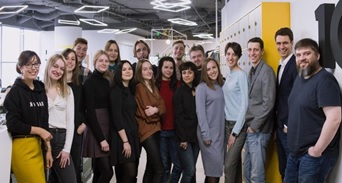 SocialBoost is one of the most prominent Ukrainian NGOs (photo) using tech to strengthen democracy.

May 15.– Within the last few months, Europe has witnessed the making of a new political star: Ukraine’s new President Volodymyr Zelensky. His rise to power has all the ingredients of a Hollywood blockbuster: actor playing a president in a successful TV show becomes president himself after defeating 43 candidates in the most contested election in Ukraine’s history and winning by a landslide against incumbent Petro Poroshenko in the run-off vote.

This week, Ukraine is holding parliamentary elections, the culmination of Zelensky's whirlwind two months in office, which saw the new president dissolve Parliament, issue a public call for new peace talks with Russia and seek to build trust with the country’s Western allies through visits to Brussels, Berlin and Toronto.

Whatever you may think of Zelenski’s individual merits, one thing is clear: the context around his election is proof that democracy is alive and buzzing in a country that was hit hard by Russia’s takeover of Crimea in 2014 and the ensuing war in the Donbass region.

A primary catalyst of Ukraine’s resilience has been the rebirth of its civil society in the wake of the 2014 Euromaidan Revolution. NGOs and citizen groups have taken a proactive role in addressing the country’s most intractable problems around countering public corruption, streamlining governance processes and increasing accountability. However, these organizations, buzzing with creativity and resourcefulness, are rarely mentioned in international media coverage of Ukrainian politics. Among them, three stand out through how they use technology innovations to strengthen Ukrainian society: SocialBoost, Dozorro and Centre UA.
(...)

back to top
Tweet
IF YOU DESTROY A FREE MARKET YOU CREATE A BLACK MARKET.
Winston Churchill